»Play
Klahvu is an online typing tutor game. To win a game round you must complete 40 lines before the other players. Remember not to glance at your keyboard and only look at the screen.

»Play
Drill your mental arithmetic skills. Practice addition, subtraction, multiplicaton and division. Correct answer will give one point but wrong answer will take off three. Can you collect 40 points?

»Play
Number game - remove all the numbers. Two numbers can be removed by clicking on them. Those numbers must be located side by side, either from left to right or vertically. Numbers must be the same or theirs sum must be 10. When there is no more numbers that can be removed, remaining numbers are automatically added to the end - hopefully this creates possibilities to finish the game. 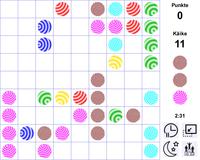 »Play
Color Lines - classic game from the 90s. The goal is to remove the balls by forming lines of balls. Balls are removed when line of at least five balls of the same color is formed. To move a ball, click on it, then click on an empty cell where you want to move it. There must be a path of empty cells from the current position of the ball to the desired destination. After each move three new balls are added to the game field unless a line is formed.

»Play
Tic-Tac-Toe (also known as Noughts and crosses) - the goal is to get three Xs or Os in a horizontal, vertical, or diagonal row. You play against the computer until you lose a game round. Every game round gives points. Faster play gives bonus points. More points you get the better player you are!

»Play
PuzzleSokoban is a logic game where you need to assemble puzzle pieces which are scattered around the maze.
Only one piece can be pushed at a time. Use as few pushes/moves as possible to push all the pieces to their destinations

. You can move by using the arrow keys or also with mouse.